‘In the sixth month, the angel Gabriel was sent from God to a town of Galilee called Nazareth, to a virgin betrothed to a man named Joseph, of the house of David, and the virgin’s name was Mary. And coming to her, he said, “Hail, favoured one! The Lord is with you.” But she was greatly troubled at what was said and pondered what sort of greeting this might be. Then the angel said to her, “Do not be afraid, Mary, for you have found favour with God. Behold, you will conceive in your womb and bear a son, and you shall name him Jesus. He will be great and will be called Son of the Most High, 11 and the Lord God will give him the throne of David his father, and he will rule over the house of Jacob forever, and of his kingdom there will be no end.” But Mary said to the angel, “How can this be, since I have no relations with a man?” And the angel said to her in reply, “The Holy Spirit will come upon you, and the power of the Most High will overshadow you. Therefore the child to be born will be called holy, the Son of God. And behold, Elizabeth, your relative, has also conceived 13 a son in her old age, and this is the sixth month for her who was called barren; for nothing will be impossible for God.” Mary said, “Behold, I am the handmaid of the Lord. May it be done to me according to your word.” Then the angel departed from her’.
Luke 1, 27-38

We read in Mary: Grace and Hope in Christ, 5, that ‘God’s grace calls for and enables human response. This is seen in the Gospel account of the Annunciation, where the angel’s message evokes the response of Mary. The Incarnation and all that it entailed, including the passion, death and resurrection of Christ and the birth of the Church, came about by way of Mary’s freely uttered fiat – “let it be done to me according to your word” (Luke 1, 38). 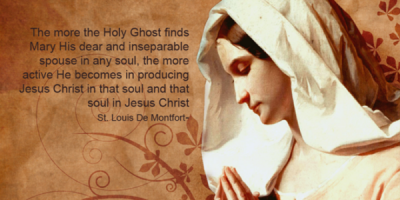 We recognise in the event of the Incarnation God’s gracious ‘Yes’ to humanity as a whole. This reminds us once more of the Apostle’s words in 2 Corinthians 1, 18-20: all God’s promises find their ‘Yes’ in the Son of God, JesusChrist. In this context, Mary’s fiat can be seen as the supreme instance of a believer’s ‘Amen’ in response to the ‘Yes’ of God. Christian disciples respond to the same “Yes” with their own ‘Amen’. Thus they know themselves to be children of the one heavenly Father, born of the Spirit as brothers and sisters of Jesus Christ, drawn into the communion of love of the Blessed Trinity.

Mary epitomises such participation in the life of God. Her response was not made without profound questioning, and it issued in a life of joy intermingled with sorrow, taking her even to the foot of her son’s cross. When Christians join in Mary’s ‘Amen’ to the ‘Yes’ of God in Christ, they commit themselves to an obedient response to the Word of God, which leads to a life of prayer and service. Like Mary, they not only magnify the Lord with their lips: they commit themselves to serve God’s justice with their lives (cf Luke 1, 46-55)