The Story of Walsingham

The story of how Walsingham became a place of pilgrimage is enshrined in an old ballad, written many years after the events it purports to speak of actually took place. 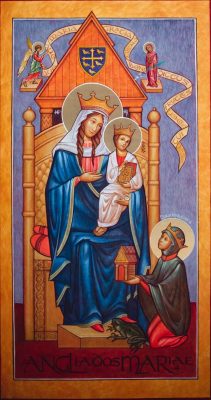 In 1061, so the story goes, the lady of the manor of Little Walsingham in Norfolk, a widow named Richeldis, prayed to our Lady asking how she could honour her in some special way. In answer to this prayer Mary led Richeldis in spirit to Nazareth and showed her the house in which she had first received the angel’s message. Mary told Richeldis to take the measurements of this house and build another one just like it in Walsingham. It would be a place where people could come to honour her and her Son, remembering especially the mystery of the Annunciation and Mary’s joyful ‘yes’ to conceiving the Saviour.

The late eleventh century and all through the twelfth and thirteenth century was the era of the crusades, which saw a growing interest in the sites consecrated by the human presence of Jesus in the Holy Land. But now pilgrims need not go so far; in England itself there was a ‘new Nazareth’ built by one of their own countrywomen.

After some time Augustinian canons took over the care of the holy house and enshrined it in a special chapel within a much larger church. Pilgrims began to come from all over England and even abroad. From the time of Henry III nearly all the kings and queens of the realm visited Walsingham, as well as hundreds of ordinary people seeking help, healing and inner peace. Walsingham ranked with Rome, Jerusalem and Compostella in importance as a pilgrimage destination. 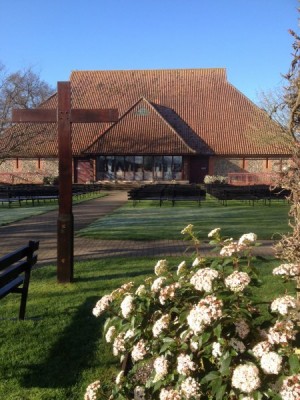 However, the Shrine was destroyed at the time of the Reformation, and only rebuilt at the beginning of the twentieth century, mainly due to the inspired leadership of the Anglican vicar of Walsingham, Fr Hope Patten. He revived devotion to Our Lady under this title and built a new shrine Church and Holy House in the village, together with a statue modelled on that depicted on the ancient priory seal. It shows a seated Mary with her Son on her lap holding a book of the gospels.

Meanwhile a Miss Charlotte Boyd had purchased and restored the ancient Slipper Chapel a mile away and gifted it to the Catholic Church. This has since become the National Shrine of the Catholic Church in England. So Walsingham is a village dedicated to Mary, a place of ecumenical pilgrimage with a growing understanding of the original message of Walsingham as received by Richeldis – that it should be a place where the joy of the Annunciation could be remembered and celebrated, for the Word became flesh and dwelt amongst us through Mary’s joyful and ready ‘yes,’ spoken within an ordinary house that would become the boyhood home of the Son of God himself.