People used to ask me why I considered religious life. The quickest answer I could give was because I believed it was what God wanted me to do, and it afforded me the opportunity to devote myself entirely to Christ.

I didn’t always feel this way. I converted from a non-religious background in April of 2005 following the final illness and death of Pope John Paul II. Prior to this I lived a very secular life.

My journey to faith was very long and slow. God announced himself to me in a very dynamic way when I was 21 however, being young and foolish I was not ready to answer Him. God called again several times but I wouldn’t answer Him.  Eventually when I was 34, having sought happiness in all the places apart from the only one that could truly give it to me, I finally got to the point where the Lord made me see that apart from Him all pleasure is empty, and happiness outside of Christ is an illusion. 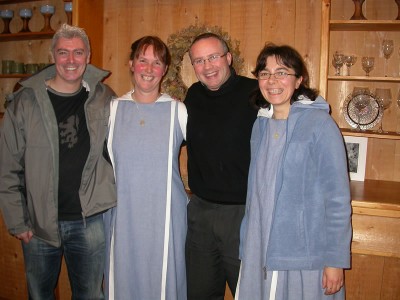 My conversion was somewhat overwhelming as not only did I feel a great desire to start going to church, but I also felt a strong urge towards the priesthood. Me! Ha ha.  However, God knows us so completely and He certainly knew what he needed to do to get my attention.

Over the next four years, with each yes I gave Him, He gave me grace in greater measure.  I still tried to twist and turn away from this calling at times, but the one thing I just couldn’t seem to get away from was a growing love for Jesus. He melted all my defences one by one to the point that I eventually worked out that God wanted me to live in community and become the first brother of COLW in 2009.

I continued my discernment as I progressed from Aspirancy to Postulancy. I also had some therapy as I knew I still had some issues to work through and some learning to complete to become a whole person before I could make a truly free choice to follow God’s will for me. As the formation model of the community taught me to become more reflective, I gradually began to feel a call to marriage rather than the religious life.

After much thinking and consultation with my therapist and spiritual director, I took the decision to leave. I understand now that He wanted a time of healing for me and He knew that it was in the charism of COLW and the support of the community that I could get this.

After leaving COLW I met my future wife Magda. Following our subsequent marriage, God blessed us with two beautiful daughters, Maddie and Chloe.

I would encourage anyone considering giving themselves to God to be patient, open minded and above all honest with themselves. A good discernment takes time. The Lord challenges you. He asks you questions you may not be ready to answer. But He is patient and merciful and won’t lead you anywhere that isn’t right for you. The trick is to try and put your own ego to one side (something I didn’t always manage to do) and listen to Him. If you can do this then Jesus, our friend, teacher and saviour will lead you to where He wants you to be. Just be generous in spirit and courageous in your determination to surrender to the Lord’s will for you. God bless you in your discernment and in the choices you make.