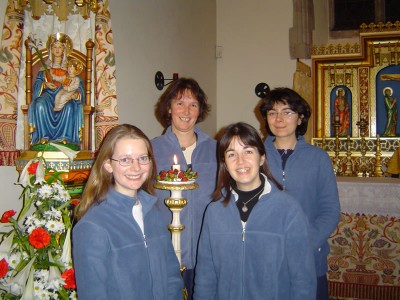 I began my journey officially with the Community of Our Lady of Walsingham on its founding day Epiphany 2004, when I committed to discern my vocation with the community as a novice.

However, the journey had begun before that as a member of the founding group.

In July 2004, I discerned that I was not called to religious life (COLW at that time was not an Ecclesial family) and so I left.  In due course, I recognised the call to marriage and married James.

Our family has moved from London to Bath and then to Yorkshire before finally James’ career brought us to Norfolk and ten miles from Walsingham. 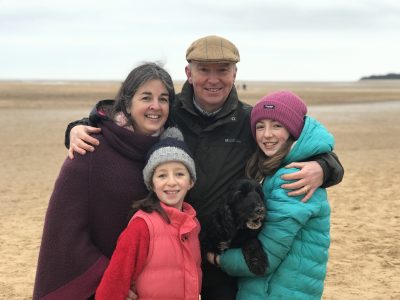 When James asked me in London, fifteen years ago, where I wanted to live, I answered ‘somewhere where all vocational states could be visible to the children’ (he meant where geographically!).  I feel blessed  to not only be in Walsingham, where we have made our home but to be journeying for a second time with COLW, this time as a married woman.  My state of life has changed but it is the same charism of the community which attracts me.

I became a member of the lay branch of COLW in 2019 during a period of discernment and learning about the community.

I had, of course become quite familiar with the community during my marriage to Sona, even back to first meeting them after we got engaged. After all, it had been a big part of Sona’s life and so it was to be a big part of mine. What has struck me since these early days was the commitment and enthusiasm shown by Sr Camilla and all the sisters, through all the changes that have occurred to the community. It has been an enthusiasm born out of love and joy which has been the hallmark of the community and what has attracted me to the community all along.

As a lay member now I appreciate the support and love we share of course, but I am also benefitting from the teaching we are receiving from the sisters: teaching that has given me greater clarity and insight about my faith and about the way I practice discipleship. I know that as my children grow up they too will benefit from this sound teaching.